← SCOTUS on Voting Rights: Dueling Metaphors
BoA: What We Stand For →

As Goes Mississippi So Goes Tennessee?

The Atlantic over the weekend ran a piece by Molly Ball, its staff writer covering national politics, enticingly titled Can Democrats Win Back the Deep South? “Less far-fetched than you think” is the answer featured in the subhed and developed in the piece, which takes as its starting point a handful of elections in Mississippi earlier this month in which Democrats won mayoral victories in Republican strongholds. Dem wins in Meridian, Ocean Springs, Starkville and Tupelo had state Democratic Party Chair Rickey Cole trumpeting gains in fund-raising, technology, and ground game, and optimistically concluding that “we are seeing the healthy maturation in Mississippi to a two-party system.” The acid retort from one Republican partisan quoted by the Jackson Clarion-Ledger: “If I was a member of a party that only held one of our eight statewide offices, I would look for victory wherever I can, too.”

Ball’s Atlantic piece ponders the implications of Mississippi’s recent “Blue Tuesday” for the broader possibility of a de-crimsoned South:

A handful of local elections in Mississippi is hardly a blue wave. But Democrats across the South hope what just happened there is the start of something big — the first ripple of a Democratic comeback in the Deep South….A Democratic comeback will be a tall order, to say the least, in a region whose political story in recent decades has been a steady march toward the GOP. “It’s hard to conceive we could go any farther down,” chuckled Don Fowler, the South Carolinian who chaired the Democratic National Committee in the 1990s and is now chairman of South Forward. “But where can you find a place where a new Democratic thrust would be more welcome and could do more good?”

Ultimately Ball settles on the popular theme of demographic destiny as the basis for optimism that a blue South might rise again. As the map below illustrates, southern states are among those with the nation’s fastest-growing Latino populations. Combine that with growth in African-American numbers as well and you have some southern states headed for majority-minority status in the not-too-distant future (Georgia and Mississippi within a decade at current rates of growth, according to the Atlantic piece). 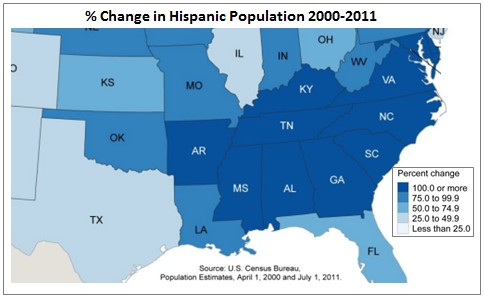 But growth is one thing; actual population is another. Although the map above puts us right there with other southern states in Latino population growth, Tennessee’s markedly lighter blue profile in map below (compared to the Carolinas and Georgia) suggests that Tennessee may be slower than some other southern states to reap the political effects of these demographic developments. 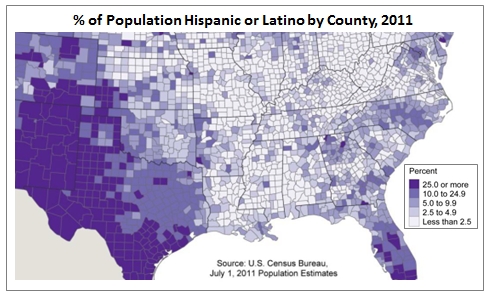 Ball points to newly organized groups pushing a trans-regional strategy aimed at electoral gains for southern Democrats. One is South Forward, a PAC that describes its mission as fostering “an integrated, multifaceted approach to revitalizing and growing the Democratic South.” By multifaceted they mean not just raising money for federal office seekers, but also doing candidate and campaign-management training, as well as providing direct support for down-ballot races.

Another is The Southern Project, an effort launched at last year’s Democratic National Convention in Charlotte that sums up its mission this way:

Driven by changes in demographics, [the South] has over the past few election cycles shown increasingly Progressive tendencies. Accordingly, Project New America — which was formed five years ago as Project New West by Western leaders, thinkers, and strategists as a tool to interpret and exploit the values and attitudes driving two decades of dramatic growth in the West — has now turned its resources and expertise to the South.

These kinds of organized efforts are important. Changing demographics may open opportunities for Democrats across the South, but as the Clarion-Ledger‘s analysis of what made Mississippi’s Blue Tuesday possible reveals, the things that win elections are, as ever, good candidates, lots of money, tactics, data, social media, and ground game. For that you need serious organization, not just favorable trends in census data.