← As Goes Mississippi So Goes Tennessee?
College Republicans on Winning Back Young Voters →

BoA: What We Stand For

From ProPublica, a headline that tells us everything we need to know about why large corporations generally, and financial institutions specifically, have such a hard time cultivating consumer trust: 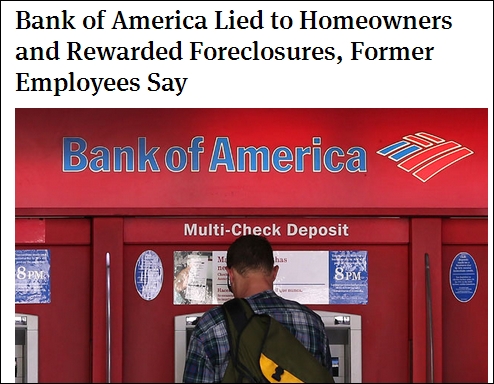 Bank of America employees regularly lied to homeowners seeking loan modifications, denied their applications for made-up reasons, and were rewarded for sending homeowners to foreclosure, according to sworn statements by former bank employees.

Sometimes, homeowners were simply denied en masse in a procedure called a “blitz,” said William Wilson, Jr., who worked as an underwriter and manager from 2010 until 2012. As part of the modification applications, homeowners were required to send in documents with their financial information. About twice a month, Wilson said, the bank ordered that all files with documentation 60 or more days old simply be denied. “During a blitz, a single team would decline between 600 and 1,500 modification files at a time,” he said in the sworn declaration. To justify the denials, employees produced fictitious reasons, for instance saying the homeowner had not sent in the required documents, when in actuality, they had.

Five of the former Bank of America employees stated that they were encouraged to mislead customers. “We were told to lie to customers and claim that Bank of America had not received documents it had requested,” said Simone Gordon, who worked at the bank from 2007 until early 2012 as a senior collector. “We were told that admitting that the Bank received documents ‘would open a can of worms,’” she said, since the bank was required to underwrite applications within 30 days of receiving documents and didn’t have adequate staff.

And of course the inevitable denial:

In a statement, a Bank of America spokesman said that each of the former employees’ statements is “rife with factual inaccuracies” and that the bank will respond more fully in court next month.

It all fits elegantly with BoA CEO Brian Moynihan’s “What We Stand For” declaration: “Our purpose is clear. We are here to make the financial lives of those who do business with us better.”