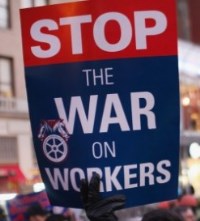 An op-ed in this morning’s Tennessean by my friend and Vanderbilt colleague Dan Cornfield calls elected officials in Tennessee to account for their vocal opposition to unionization at Volkswagen’s Chattanooga plant. Cornfield is alluding, presumably, to comments from the likes of Gov. Bill Haslam, who responded back in March to reports of UAW involvement at VW that “I would hate for anything to happen that would hurt the productivity of the plant or to deter investment in Chattanooga.” And to Sen. Bob Corker, who in September said that allowing the UAW into VW’s Tennessee plant would make the company a “laughingstock in the business world.”

Turns out we already have many of these laughingstocks, as Cornfield points out:

To Cornfield’s argument about “the positive economic impact of unionized corporations on the prestige and growth of the sate economy,” I would add that we’re talking about basic labor rights here. Haslam, Corker, and their fellow anti-union travelers seem to need reminding that collective bargaining is a fundamental human right codified in Article 23 of the Universal Declaration of Human Rights (which of course the U.S. helped draft and voted to adopt over half a century ago):

Everyone has the right to form and to join trade unions for the protection of his interests.

Elected officials who are ignorant of basic rights are far more likely to make the state a “laughingstock” than the exercise of those rights by working Tennesseans.

A Washington Post op-ed last week tells the story of a woman who decided to quit her job at a physician’s office because her employer wouldn’t let her keep a hoodie image as her computer desktop’s wallpaper. Brenda Howard had selected the image as a show of support for Trayvon Martin’s family in the wake of the Zimmerman trial. She writes of the boss’s disapproval:

On Aug. 1, at the end of a long work day, my boss called me into his office. Apparently, during the two weeks since I had selected the hoodie image for my computer desktop, some of my co-workers had complained. They felt that this image, which could be seen only when I logged in or minimized all the windows open on my screen, was inappropriate. My boss, looking distressed, told me that I had to change it.

There was no room for discussion between him and me or me and them. There would be no way to explain, to anyone who felt frightened or threatened by what I had done, that I wasn’t making some call to arms, or a black-power salute, or in fact trying to express any anger at all. It was merely an image of a piece of clothing worn by a young man who was wrongfully killed. By displaying it, I was simply saying that I was sad.

Obviously the boss’s position is legal — an employer gets to decide what is or isn’t displayed in a work space, including on the desktop of an office computer. But just because an employer can regulate expressive activity doesn’t mean it must do so. Howard’s situation is precisely the kind of overreaction I had in mind when I wrote about managerial regulation of expression in my book on the First Amendment and the workplace:

It isn’t all that hard to think of situations where employee expression poses a genuine threat to legitimate employer interests, and a functional free-enterprise system need not require employers to tolerate speech of that sort. It’s alarming, however, when people are punished on the job not because their speech concretely jeopardized employer interests, but because their actions trigger needless employer fears about the effects that might possibly occur. We have built in the American economy a management culture so dependent on predictability and control that even remote “threats” to the established order are treated with suspicion and dealt with harshly. The American legal systems of employment law and corporate governance largely excuse employers from worrying about how their actions square with constitutional values or human rights.

Howard writes in the op-ed that she left the meeting with her boss knowing “that he had every right to ask me to take it [the image] down, but I would not have respected myself if I had.” A silly managerial decision needlessly put a long-term employee in an untenable situation, all over the simple matter of harmless personal expression.