Heading Into the Final Weekend… 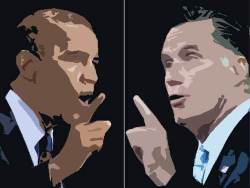 Seven observations as we hit the pre-election weekend, on the other side of which looms … madness?

[1] A clear difference. You can spin the year’s battles over voter ID, early voting and voting rights in general in numerous ways, and we can expect plenty of litigation on this after the election. There is an inescapable truth, however, that overlays the entire matter: The country has one political party trying to make it possible for more people to vote, and one party doing all it can to see to it that fewer people vote.

[2] Still no reason to freak out. Last weekend I counseled Obamaphiles to keep their freakout impulses in check because “polls in the aggregate are actually painting a quite consistent picture, one that favors Obama in almost all the important battlegrounds.” Well now, a week later, nothing significant has changed on the polling front, except perhaps some slight movement in Obama’s direction (but slight). Core observations from polling remain: In Ohio, of the 25 polls going back to October 7, Obama has led in 19 of them, Romney in 2, and 4 have shown a tie; Romney has led in just one of the most recent 10 polls there. In New Hampshire Obama has led in all five polls completed since the final debate. In Wisconsin Romney hasn’t led in a poll since mid-August. The story in Iowa is a bit less convincing, and clearly Virginia and Colorado are dodgy, but Obama’s path to 270 remains reasonably unhampered.

[3] Reality is overrated. Mitt Romney’s quick response to this morning’s generally upbeat November jobs report was to call it “a sad reminder that the economy is at a virtual standstill.” It’s predictable that he would try to spin it toward the GOP narrative of a persistently weak economy and failed Obama presidency. But what’s fascinating (in a stupefying sort of way) is that by issuing such an emphatic and unqualified denunciation, Romney reveals himself yet again — one more time before the election, with feeling! — to be the man who will say anything no matter how obviously divorced from the reality staring him and his followers in the face. Romney’s campaign spent the better part of last week fending off collective astonishment at his truth-defying assertions regarding Jeep production in Ohio and China. Now will his surrogates have to spend the final weekend of the campaign walking back an absurdly categorical dismissal of economic recovery? I’m not sure anyone has summed up the Romney campaign as efficiently as The Economist did today in its Obama endorsement: “There are a lot of Romneys and they have committed themselves to a lot of dangerous things.”

[4] Polling may never be the same. The endgame in this year’s election cycle is somewhat remarkable for the stark differences in interpretation of what the polls mean. Naturally it’s in the interest of the side doing less well in the polls to harp on methodology as a way to craft an impending victory narrative, so some of this is mere ritual. But reports indicate it’s not just the spin that diverges across party lines; there are also said to be meaningful differences between the parties’ internal polls. Between expansions of early voting and the challenges of polling in the age of disappearing landlines, the whole science of building likely voter models is being fundamentally tested. Reid Wilson at NJ Hotline sums it up:

Regardless of the cause, strategists on both sides acknowledge the difference in their internal polling. Republicans believe Democrats are counting far too much on low-propensity voters and a booming minority turnout that isn’t going to materialize on Election Day. Democrats believe Republicans are hopelessly reliant on an electorate that looks far more like their party than the nation as a whole. The day after Election Day, somebody’s pollsters are going to be proven seriously wrong.

There is, in particular, a fascinating debate (fascinating for the wonkiest of pollgazers, anyway) about what to make of “independents” and how they break in polls. In several surveys Romney whups Obama but good among independents, and this leads some on the right to insist that there’s no way the dude can be winning independents but losing the race. The reply from the left is that independents are just “people who used to be Republicans,” folks disaffected by the rise of the Tea Party who now tell pollsters they are independent, so of course they break red. The retort from the right is that if this were the explanation then over longer periods of time we should see an inverse relationship between party ID and independent support: “you’d expect to see Republicans doing better with independents when GOP turnout is low, and Democrats doing better with independents when Democratic turnout is low.” We’ll have a much better idea next Wednesday which theory has legs.

[5] Partisan gridlock will always be the same. The Romney/Ryan closing argument is rooted in part on assertions that they can succeed at bipartisanship where Obama has failed:

Ryan: “Republicans and Democrats can come together to solve this country’s problems. And we have a proven record for actually doing that. Mitt Romney did that that as governor, and I have been doing that in the House.”

It’s fair to say that Obama has at times shown he isn’t all that good at this aspect of the job. But the claim that Romney pulled it off in Massachusetts hardly passes the smell test since he got things done with a Democratic legislature when he was willing to act like a moderate Democrat; the rest of the time he was vetoing hundreds of bills. And seriously, folks, a claim by a current House GOP leader that “I have been doing that”? In what universe can the current House Republican caucus be said to have acted in a bipartisan fashion? However it goes next Wednesday, we will still have dysfunctionally divided government.

[6] It never ends. Ready to take a break from electoral politics after next Tuesday? Fuhgetaboutit. It looks more likely than not that Dems will hold their Senate majority, but as Shane Goldmacher writes at National Journal, the landscape for Dems in Senate races in 2014 is even more treacherous. Democrats will again be defending more seats than Republicans (20-13), with incumbents in Arkansas, Louisiana, and North Carolina inherently vulnerable to conservative challenges. Factor in some possible Dem retirements in North Dakota and West Virginia. Yikes.

[7] Is this a great electoral system or what? Recounts and lawsuits aside, by this time next week we will know who is the next leader of the free world, by which of course I mean the President of the United Counties of Ohio. However this turns out, even if the candidate I prefer wins the Electoral College and loses the popular vote, the fact remains: In a contest to name the worst idea hatched by western civilization, it’s a dead heat between the Electoral College and mayonnaise.