← Compelled Speech at Work II
How Romney Reboots the Race →

Spinning as hard as he could after the debate ended, Obama senior advisor David Plouffe told a gaggle of visibly perplexed MSNBC talking heads that “Our strategy was not zingers.” No shit. Nor was it engagement, apparently. The prevailing reaction among the commentariat that it had been a good night for Mitt Romney and a weak one for Barack Obama took hold quickly and reasonably. Romney did pretty well, but the collective verdict was propelled more by Obama’s weakness than Romney’s strength. As James Carville summed it up, “The president didn’t bring his A game.”

To be sure, some heaped effusive praise on Romney for strategic and rhetorical brilliance (“head and shoulders above anything we’ve seen him do before,” declared David Gergen on CNN). But the Romney on display wasn’t really markedly different from the Romney we’ve seen all along: a prepared, lucid and congenial politician right out of central casting who will look into a camera and say whatever he thinks he needs to say to get past a question, facts and prior positions be damned. Romney owns that role, and it showed.

The disappointment articulated by Obama supporters seemed to focus on the things he didn’t talk about: job creation numbers, Bain, Detroit, foreign bank accounts, obstructionism in Congress, women, and of course that 47 percent business, to name a few. All true, but some of the biggest missed opportunities weren’t things not said, but rather things that were said — by Romney. Two in particular stand out as big openings for Obama to draw a broad and compelling contrast between their big-picture governing philosophies.

The first came in an exchange on entitlements. Pointing out that his approach to Medicare wouldn’t kick in big changes for several years, Romney said if you are 60 years old or over “you don’t need to listen any further.” Intended perhaps as a throw-away line aimed at reassuring seniors edgy about Paul Ryan’s Medicare-killing wet dreams, the remark spoke volumes about Romney’s view of the role of self-interest vs. collective responsibility — or would have spoken volumes if Obama has noticed it. Only someone who views society through a lens of selfishness and greed (the sort of person who parks their money in the Cayman Islands to avoid taxes) believes that seniors could care less about the intergenerational future of Medicare as long as they get theirs, Obama should have shot back. Since the convention the Obama campaign has been cultivating an “all in it together” theme as a counternarrative to the GOP’s righteous devotion to individualism; Romney’s remark opened up a set of double doors for Obama to stroll right through. 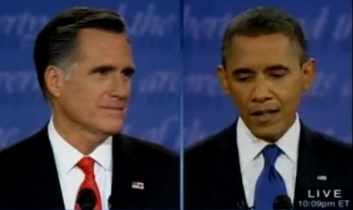 The second was on the role of government generally. “Government is not effective about bringing down the cost of anything,” Romney intoned during the health care segment, adding that “the private market and individual responsibility always work best.” Rather than letting Romney drag him into the weeds on the similarities and differences between Obamacare and Romney’s Massachusetts reform, Obama should have seen this as a golden opportunity to pivot into painting Romney as an anti-government extremist. He should have reminded viewers of the many critical things that only government can do, from public safety and public health to transportation, education and poverty alleviation, and then bridged to threats to these core public functions posed by Romney’s and the Republican party’s approach to government.

Painting Romney as beholden to the far right instincts of his party is a key piece of the president’s re-election campaign strategy in battleground states, yet a disengaged Obama in Denver failed to identify and seize on opportunities to do just that. Some observers after the debate chalked it up to being out of practice, or to running an administration where he is rarely if ever challenged in the way that Romney did on stage. Others said Romney came with a plan and Obama didn’t. All of that could be right, but the biggest impression I came away with was that Obama just wasn’t dialed in.

Shortly before the debate began the networks reported that Mitt Romney came to the hall for the debate after finishing a Cheesecake Factory dinner. I was all ready with my snarky elitist quip about how that kind of culinary decision making surely disqualifies one’s candidacy for Leader of the Free World. Memo to Axelrod: Apparently there’s some secret sauce in that cheesecake.

Funny how news cycles come and go. The far right’s effort over the last couple of days to foist an angry-black-man video of a 2007 Obama speech on us now fades into oblivion, replaced by a 90-minute disengaged-black-president video that has Mitt Romney enjoying the next couple of news cycles a whole lot more than the last several.