47gate: The Myth of Progressive Taxes

Much of the chatter about Mitt Romney’s now infamous half-the-country-can-go-fuck-itself video has focused on that 47 percent who in Romney’s words “are dependent upon government, who believe that they are victims…who pay no income tax.” It was this armchair analysis that inspired Romney to conclude in words that may someday grace the tombstone of his presidential bid: “my job is not to worry about those people.”

In the wake of this latest outbreak of Mittastatic cancer of the campaign voicebox much is being said about who actually comprises that 47 percent, and about Romney’s seemingly fundamental misunderstanding of the nature of tax obligation. This, in turn, predictably elicits the usual whining from the right about how wealthy taxpayers supposedly pay way more than their fair share of taxes.

The chart below, from The Atlantic based on data compiled by Citizens for Tax Justice, answers the question. Blue bars (income) are a bit bigger than red bars (taxes) at lower incomes, while red bars are slightly bigger than blue bars at higher incomes. In other words, very modest progressivity. Or as The Atlantic‘s economics writer Matthew O’Brien aptly puts it, “If this is Marxism, it’s very carefully disguised.” 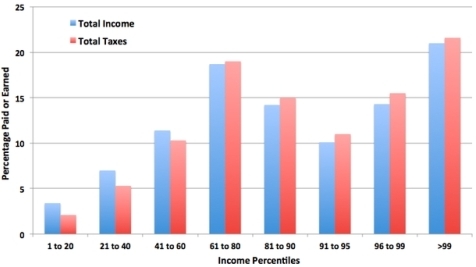