← The Free Speech Police: University Edition
Institutions and Ethics: Emory Shows Us How It’s (Not) Done → 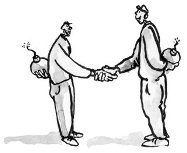 I usually find Times columnist David Brooks’ faux-moderate conservativism to be more insipid than enlightening, but today’s column offers a trenchant (and perhaps even original) insight into what’s wrong with our campaign-driven politics. Noting that in Congress, Paul Ryan repeatedly shows himself unwilling to accept half-measures or compromise on fiscal matters or entitlements, Brooks accuses Ryan of choosing “political fantasy” over significant progress:

Ryan was betting that three things would happen. First, he was betting that Republicans would beat President Obama. Second, he was betting that Republicans would win such overwhelming Congressional majorities that they would be able to push through measures Democrats hate. Third, he was betting that a group of Republican politicians would unilaterally slash one of the country’s most popular programs and that they would be able to sustain these cuts through the ensuing elections, in the face of ferocious and highly popular Democratic opposition …. Ryan’s fantasy happens to be the No. 1 political fantasy in America today, which has inebriated both parties. It is the fantasy that the other party will not exist. It is the fantasy that you are about to win a 1932-style victory that will render your opponents powerless.

The piece goes on to fashion a duality between “campaign consciousness” — the strident policy argument vibe one cultivates before an election — and “governing consciousness” — the mindset between election seasons that leads office holders to “navigate our divides to come up with something suboptimal but productive.” Brooks tags Ryan as good on the former but lousy on the latter.

Although Brooks confines his accusation to Ryan, influential figures in both parties exhibit this tendency, feeding the paralyzing gridlock that prevents anything from getting done in Congress even when it’s not campaign season. Brooks is right that way too much of the campaign discourse we endure rests on an absurdist assumption that winning the electoral college will magically activate a governing mandate. As if.

But even if there are Democrats mirroring Ryan’s behavior, it can also be said that Barack Obama has (suffers from?) the opposite profile — too much governing consciousness (an inclination to capitulate for marginal gain) and too little campaign consciousness. As Thomas Frank argues in an essay getting a lot of attention, overeager conciliation undermines your negotiating leverage, inviting the very rigidity on the other side that ends up undermining your conciliatory move.