← The Ethics (and Pronunciation) of Badminton
Sarbanes-Oxley at 10 → 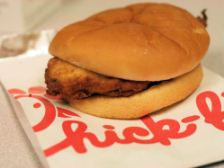 Fans of the marriage of capitalism and bigotry should keep their Wednesday lunch plans flexible, because tomorrow is Chick-fil-A Appreciation Day. Mike Huckabee conjured up the day as a celebration of all that is fabulous about a corporation he thinks is “being smeared by vicious hate speech” on the left:

The goal is simple: Let’s affirm a business that operates on Christian principles and whose executives are willing to take a stand for the Godly values we espouse by simply showing up and eating at Chick Fil-A on Wednesday, August 1. Too often, those on the left make corporate statements to show support for same sex marriage, abortion, or profanity, but if Christians affirm traditional values, we’re considered homophobic, fundamentalists, hate-mongers, and intolerant.

I’m hard to know where he finds “those on the left” making “corporate statements” supporting abortion and profanity (“Fifteen minutes will save you fifteen percent on car insurance, and while you’re at it go terminate your fucking pregancy”?), but let’s overlook that for now. With just one shopping day left until C-f-A-AD, we need to answer some of the big questions people have about l’affaire d’chicken.

The firm’s defenders would have you believe that the company doesn’t hate gay people; it just hates same-sex marriage. The current controversy was sparked by company president Dan Cathy’s observation a few weeks ago that “we are inviting God’s judgment on our nation when we shake our fist at Him and say, ‘We know better than you as to what constitutes a marriage.’ … We are very much supportive of the family, the biblical definition of the family unit.” The company’s conservative friends contend that “Chick-Fil-A has not turned away a single customer because that customer was a homosexual … [and] has not discriminated in any way against either employees or customers.”

But as groups such as the Equality Matters project have amply documented, Chick-fil-A through its charitable arm the Winshape Foundation donates millions to stridently anti-LGBT causes and organizations. We’re not talking just entities that mount legal challenges to same-sex marriage; these are groups that condemn “any homosexual act” (Fellowship of Christian Athletes), that regard being LGBT as “perverse” and promote “ex-gay therapy” (Exodus International), that frame pedophilia as a “homosexual problem” (Family Research Council), and that characterize the homosexual agenda as “a principal threat to religious freedom” (Alliance Defense Fund).

Chick-fil-A executives may say they are committed to treating people with “honor, dignity and respect … regardless of their belief, race, creed, sexual orientation or gender,” but actions speak louder than words. Through its foundation arm, the company finances hate, simple as that.

What about these reports of mayors and other elected officials threatening to block Chick-fil-A from expanding in their cities? Can they do that?

Certainly not. Voices on both the left and the right have been quick to denounce those threats, to the extent that they were actually threats to use instruments of public policy, as unsavory and absurdly impulsive assaults on the First Amendment. Even LGBT advocates get this. (An exception, a somewhat game but ultimately lame effort on the left to defend the mayors’ actions, is here, effectively refuted here.) But let’s be clear that even if public officials shouldn’t be threatening to make it harder for a business to do business because of political or religious viewpoints, those officials certainly do have the right to use their bully pulpits to express a personal opinion that they find the practices of a corporation offensive. Some have had to walk back their comments because in the scrum of the issue’s national momentum, they didn’t quite grasp the difference.

What about those on the right who locate just a wee bit of hypocrisy in Chicago Mayor Rahm Emanuel’s obstreperous objection to Chick-fil-A’s stance on marriage, given that it is the same position held by Barack Obama while Emanuel served as White House chief of staff, and held by Bill Clinton while Emanuel served in that administration? Do they have a point?

So bottom line: should you eat at Chick-fil-A on Wednesday?

If you agree with Mike Huckabee that Chick-fil-A, a firm using its profits via foundation contributions to promote intolerant bigotry, is somehow being victimized by “intolerant bigotry from the left” when those contributions are factually revealed and discussed, then sure, knock yourself out. Otherwise I’d say give it a miss.