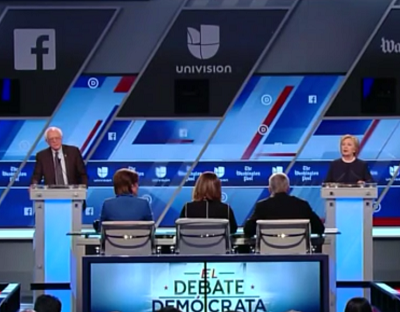 Since the last debate three days ago the main thing that’s happened is Bernie Sanders’ surprise win over Hillary Clinton in the Michigan primary, which clearly signals that this isn’t going to wrap up any time soon. But at the same time, it’s just another debate, and too soon after the last one perhaps. This debate, sponsored by Univision, took place partially in Spanish with translation. For this one we go with the new experimental short-form recap concept.

8:11 … Hillary, asked why Michigan didn’t work out, says “I’ve won some and I’ve lost some.” Bernie says Michigan was “one of the major political upsets in modern political history.” … 8:14 … will you drop out of the race if you are indicted over your emails? “It’s not going to happen, I’m not going to answer that question.” … 8:17 … Is Trump a racist? Clinton, pandering not in the least to the largely Latino audience, says she said “basta” to Trump’s rhetoric …. Trump’s character? Clinton: “It’s un-American.” Sanders: He’s a birther and by the way I beat Trump by 18 points in the latest polls … 8:23 … Clinton commits to introducing comprehensive immigration reform in her first 100 days. Sanders says you opposed immigrant drivers licenses in New York, I helped make it happen in Vermont.

8:34 … Asked if she’ll be the next deporter in chief like Obama, Clinton declares “I do not have the same policy as the current administration does…I will not deport children.” Sanders tags Clinton as disingenuous because she didn’t support letting in kids coming in from Honduras fleeing violence … 8:41 … Complaining that Clinton keeps picking out pieces of legislation to launch attacks against him, Sanders asserts, “Madame Secretary I will match my record against yours any day of the week.” Huge applause … 8:44 … When Sanders natters on too long the moderator says “your time is up and we have to move on so put a sock in it Senator” (paraphrasing). Now there’s a novel debate twist – moderators who actually keep control. These Univision moderators rock!

8:46 … Trump’s wall? Clinton: hate it. But didn’t you vote for a wall? Clinton: Yeah but his is tall and beautiful and paid by Mexico, which is fantasy. Turns out she’s pro-fencing but anti-wall. Doesn’t say where she stands on the crucial wood slat vs. chain link question … 8:49 … An audience member whose family was deported asks about reuniting families. Sanders says I have a great policy that The New York Times really likes. Clinton gives a more emotional answer that connects with the questioner’s struggle. Bernie says he’ll solve the problem; Hillary conveys that she actually understands the problem … 8:52 … Clinton asked about polls showing nobody trusts her. So what up with that? She does a reasonable job saying hey I do what I can do and screw the haters (that last part implicit).

8:54 … Why should we care if Clinton releases transcripts of Wall Street speeches? Sanders gives a frivolous answer: if you are paid so much for a speech it must be great so let’s hear it. Draws laughter and applause but it misses the point … 8:58 … Hillary tries to wrap the Koch Brothers around Sanders because they like one of his economic positions. Sanders insists nobody is more unfriendly to the Koch Brothers than him. We can’t really settle this without the Koch Brothers in the room, and it’s pretty clear that the Koch Brothers are not in the room … 9:03 … Ramos asks a Benghazi question, drawing boos in the room. Confronted with a video from the parent of a Benghazi victim, Clinton gives a strong answer that says the parent in the video is just plain wrong. A good moment for her, she is speaking directly, authentically, without artifice.

9:12 … Salinas asks Sanders a crafty question: Why should we prefer a “career politician” like you to an “establishment politician” of the sort you reject? He says what matters is the record – a record he is proud of. He gets away unscathed with the fact that it’s a record of advocacy more than a record of accomplishment … 9:14 … Jobs that will improve the living conditions of Latinos? Clinton has a plan. Namechecks a Latino congresswomen. Bernie says “yuge” … 9:18 … Ramos engages Sanders on the college tuition thing. Should Trump’s or Clinton’s grandchildren go to college free? Sanders: Sure! They can go to public school free, don’t they? … 9:21 … Audience member, a young woman in college, wants to know how she’ll be able to continue her education without excessive debt? Clinton with strong answer re student dept. Sanders condescendingly applauds Clinton for copying the very good idea that he had first.

9:25 … A heated exchange on whether universal health care through a single payer plan is reasonable. Clinton says not gonna happen. Sanders says well see, she doesn’t think the people are in favor of genuine universal care … 9:28 … On climate change a solid policy-focused answer from Clinton. Bernie brags that he has introduced sweeping legislation (the key word there being “introduced” not “passed”), and goes all in for a carbon tax and an end to fracking. It’s an issue that illustrates quite clearly the difference between a pragmatist and an optimist … 9:33 … Clinton is asked if Bill Clinton and Barack Obama relied too much on economic advisors from the big banks. The answer, of course, is yes, but she predictably chooses instead to say many words that do not answer the question, culminating in placing blame on George W. Bush. Would have been easier and more effective to just say yes.

9:40 … Cuba. Clinton says smart things. Sanders says smart things. Then the play some classic old mid-80s video of Sanders wearing a Che beret saying nice things about Latin American dictatorships. Nice background work Univision! (Though I may have made up the part about the headgear.) Gives Bernie an opportunity to go after the last 50 years of U.S. foreign policy. Interesting stuff but probably over the heads of most voters. What Sanders might have thought of or said about Daniel Ortega in 1985 is just not going to be a factor in the 2016 election.

There was more on Puerto Rico’s debt, SCOTUS, and the Demarco Murray trade before they wrapped it up. Props to the moderators for asking sharp questions, keeping it moving, and following up when questions weren’t answered. Both candidates were on their game. The thing the Democrats having going for them is that the party faithful are comfortable with both candidates, and this constructive exchange does little to change that. It is noteworthy that we have had two debates spanning four hours in the last three days, and outside of trade talk on Sunday and the limited conversation in this one about Latin America, foreign policy has been pretty much completely overlooked. Clinton always bests Sanders there, so its absence helps Bernie.

Next up Thursday, the GOP candidates and their johnsons.