The third and final presidential debate followed the same format as the first: six 15-minute segments each marked by and launched with a new question from the moderator. Unlike the meandering festival of time drift presided over by Jim Lehrer two weeks ago, Bob Schieffer ran this one with well-oiled precision, starting each segment right on time and quietly herding the candidates into exchanges that yielded roughly equal time. Schieffer’s followup questions were few but useful, and you never had the feeling that he had lost control or left the building. Clear win for the moderator.

And how did the other two guys do? In the spirit of the debate’s hexagonal structure, I’ll recap with snap (and perhaps occasionally snappy) judgments of each of the 15-minute block segments.

8:00 pm (pregame): Wolf Blitzer at CNN, just before throwing it over to the debate hall, sets the mood by telling viewers that “one misstatement could cause international ramifications.” Way to raise false hopes, WB. If no international incident comes out of this we’re going to be very disappointed.

8:00-8:15. First up was Libya, and with his first tepid answer it was quickly apparent that Mitt Romney came to play it safe, avoid conflict, show off memorized factoids (he mentioned Mali twice in the first ten minutes, for crying out loud), and generally focus on the “appear presidential” thing. Obama made it just as quickly obvious that he wasn’t playing the same game, telling Romney that “every time you’ve offered an opinion you’ve been wrong.” Romney shot back that “attacking me is not an agenda,” which quickly trended bigtime in the right wing Twittersphere, even if attacking him actually is a quite effective agenda, in a debate anyway. Obama wrapped up the segment lecturing Romney to “listen up, punk” (“Here’s one thing I’ve learned as Commander in Chief” was the exact phrase) on the need to be clear to allies and foes “about where you stand and what you mean.” Romney’s face: not happy. Advantage Obama.

8:15-8:30. Second segment was on Syria, and here we started to see just how prepared Romney was to reinvent himself on foreign policy to make his approach look more or less exactly like Obama’s. Obama tried to slam Romney with the charge that “he doesn’t have different ideas,” but it comes off inevitably as a pretty benign critique when the worst thing you can say about your opponent is that he agrees with you. Obama is vulnerable on Syria, given how hard it is to defend a pretty minimalist policy in the face of atrocity, although Romney didn’t capitalize. For the segment, slight advantage Romney despite some rambling, if only because he seemed able to articulate Obama’s position on Syria at least as well as Obama did.

8:30-8:45. This was the domestic issues part of the foreign policy debate, disguised as a question about America’s role in the world. It turns out America’s role in the world is to argue about its own unemployment rate and energy policy. Obama landed punches connecting Romney’s “wrong and reckless policies” at home and abroad directly to George W. Bush and Dick Cheney. Romney responded with his economic stump speech (five-point plan, 12 million jobs, etc.), and somehow the exchange devolved into an exchange on education policy in Massachusetts. Granted, many Romney supporters do see things that happen in Massachusetts as foreign policy, but it still felt like we had strayed just a wee bit. Schieffer pulled the train back on the track with a followup asking Romney where he’ll find the money for more military spending. This led Romney into his “smallest Navy since 1917” schtick, onto which Obama pounced with his observation that Romney needs to learn more about changing times because “we also have fewer horses and bayonets.” Did you have “bayonets” on your debate drinking game list? I know I did. Advantage Obama for articulating a position on military spending grounded in strategy rather than red-meat blusterc. 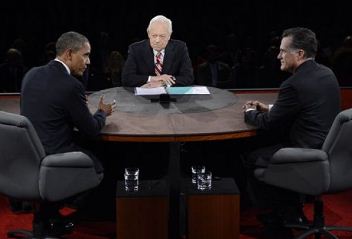 8:45-9:00. With a question on Iran this was the who-can-stroke-Israel’s-penis-with-greater-devotion-and-tenderness part of the evening. Romney again spent more time agreeing with Obama than differing, saying of the sanctions imposed on Iran that “they do work…You’re seeing it right now in the economy.” It turned nastier when Romney played one of his moldiest oldies — the “Obama apology tour” card, which the CNN dial group did not go for at all, and which Obama dismissed as “just about the biggest whopper” of the campaign. Romney offered up the painfully simplistic but rhetorically effective observation that “We’re four years closer to a nuclear Iran” coupled with a scolding of Obama for skipping Israel on that 2008 “apology tour” (drink); Obama comes back at him with a narrative travelogue of his visit to Israel in 2008 as a candidate. Romney asserts our influence around the world is receding “because of the failure of the president to deal with our economic challenges at home” (pivot!). Obama thanks Romney for supporting his policies, and wraps up the segment with an emotional ground zero story. A draw on Iran and Israel (both quite tender and devoted); slight advantage Obama for leaving Romney with a look on his face that says “now where did I put that bayonet?”

9:00-9:15. Afghanistan. There is very little daylight between their approaches here, and it showed. Both plan to be out by the end of 2014, both think Pakistan is a scary place, both like drones and killing bad guys. The exchange does show that on at least this one issue U.S. policy is basically unified and bipartisan. That might be a good thing, except that as a result nobody is having a serious moral conversation about the use of drones for indiscriminate killing of innocent civilians, about presidential kill lists, about the limits of executive power in the age of terror. Advantage: mindless violence and endless war.

9:15-9:30. China! If you had “cheap chinese tires” on your drinking game list this was the segment for you. Obama accuses Romney of poor judgment on trade involving said tires, then pivots back to domestic issues — education, technology, and the evils of Romney’s budget. Romney replies that the greatest threat the world faces is nuclear Iran (just to make sure we all get that), and then launches his China currency manipulation bit, which always kills. Schieffer asks if Romney is planning to start a trade war, Romney reveals his recent discovery that there are counterfeit products out there (valves of some sort), and before you know it Obama is telling us that if we listen to Romney “we’d be buying cars from China instead of selling cars to China.” Obama neglects to say if those cars would have cheap Chinese tires on them. (drink anyway!) The China-trade segment is more or less a draw until Romney lets Obama bait him on the auto bailout into a defensive rant (an attempt to “airbrush history,” Obama declares). Cue an Obama stump speechlet on domestic policy, followed by a Romney stumplet, culminating in a gratuitious assertion that “I love teachers.” You mean like you love Israel?

9:30ish. Closing statements. Both candidates hop another fast train to boilerplate city. Nothing compelling although Romney did assert that he wants “to see growing peace in this country.” I have no idea what that means but candidates don’t talk about peace enough in my book, so slight advantage Romney on the closing statements.

Who won? The instant polls said Obama, ranging from margins of 8 points in CNN’s survey of debate watchers to a whopping 30 points in a CBS poll of only undecided voters. And as well they should: We can concede that Romney accomplished his modest goal of looking reasonable and qualified, and we can debate whether the all important wilted-flower voting segment finds verbal assertiveness off-putting. But the bottom line is that we saw the incumbent deliver an adept, knowledgeable, forceful performance that generally over-matched the well meaning foreign policy amateur sitting next to him. It won’t move the polls as debate #1 did, but it does amply reinforce the current narrative: a very thin Obama lead nationally, with a bit of a wider margin in the electoral college — leads that are barely there, but more likely to expand (though not much) than contract.